– Frederik Aerts is master in productdesign.

– Has worked successively since 1994 for companies including Multiline, Vasco and Berghoff, culminating in the setting up of his own Frederik Aerts product design company in 2015. 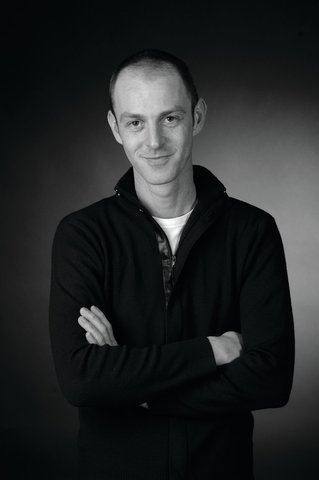 Frederik Aerts was employed as a designer at Berghoff, and was allowed to assess all the products, ultimately renewing a number of them. “I decided to start from the basis”, he explains, “and that basis is the saucepan, because the design of the saucepan often determines the complete product line.” And even more than that, as it transpired.

Aerts believes that designs do not, by definition, need to be adapted functionally, but they can be innovative. Preferably so, even. So the most logical question during the research was whether or not there was a problem with those saucepans, and if so, whether it could be solved.

“Draining off liquids, it soon became clear, was the biggest problem. Either the handles were too hot to hold, or a separate colander was needed. There was always some problem.” So now the problem was clear, it was time to find a solution, and one which didn’t look contrived. “I wanted to integrate the functionality into the design, that was my starting point. The saucepan had to be as beautiful as it could be, with handles set into the lid, and an opening to make it possible to drain off water with no extra aids, and without danger to life and limb”. Didn’t that already exist then? There were indeed some variations on that, but without the uniqueness of the close interlinking of function and design. That is also the reason why this design has a patent for the shape, instead of a technical patent. And even then, the most important patent is in the long list of prizes and awards that Aerts received for his saucepan. It’s obvious where the design comes from, and who designed it.

There is great innovation in material, but as a designer Aerts does not invent new materials. There is a version of the saucepan in stainless steel, and one with plastic handles and a glass lid. He is constantly trying out new materials, applied in new ways; this is his way of innovating. And innovation seems to be the equivalent of copy, since there are already a number of them around.

“I knew while I was designing it that it was going to be big, you can just feel it. It was exactly right. It happens all too often that you go too far with the shape and get penalised as a designer because the item no longer fulfils its function or works as well as it should.” And that goes for saucepans, a set of knives or even radiators, with which Aerts made his mark while working at Vasco. “I made the switch from radiators to kitchen utensils, and the biggest difference is in the designs. At its best, a radiator is almost a painting; it hangs on the wall, but is not handled on a daily basis by the user. With utensils, everything comes together, they’re not just for looking at. And I believe that this is the nuance that distinguishes the designer from the artist.”