– Ludovic Beckers combines working in his own hairdressing salon ‘House of Artistry’ with his work as a creative artist for Redken International, Sanke Academy Belgium and Curve-O, and has an international career as hairdresser educator.

– His interactive shows attract many visitors, and he has stacked up more than 100 national and international awards.

“If you look at the history of the comb, you can only decide that it has always been straight. It’s crazy that the design of something like this is only now changing.” So says Ludovic Beckers, hairdresser and designer of the Curve-O, a cutting comb which is turning the hairdressing profession upside down, both literally and figuratively. 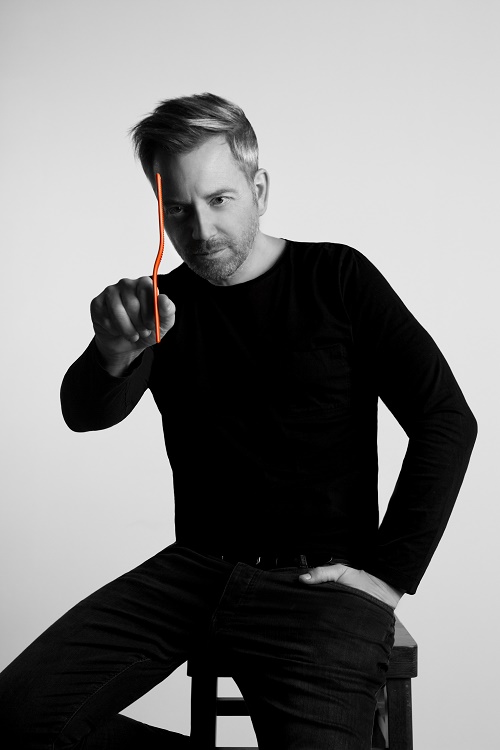 A collection of hairstyles which was to serve as a passe-partout for everyone in the world; that was the starting point for the Curve-O. It was to suit every type of person, head and face, and that demanded an approach that was both new and accurate.

“During the designing of the hairstyles, I quickly came up against the fact that in order to work so all-round, and follow natural curves, I would have to work with convex and concave lines. However, all the material to hand deviated from that idea.” A comb, as ordinary people know it, does not, and did not, fall into that category. So a lit cigarette lighter was held under a comb to bend it, and a prototype was born. “I started off by bending the comb round completely, but that wasn’t logical either. You still need straight sides.” A curve was to offer the ideal solution.

The comb was used, from one course to the other, for ten years. The reactions turned out to be mainly positive, and L’Oréal came knocking at the door to recruit Ludovic to their side, even taking on the further development of the comb. Ludovic’s practical experience and the technical knowledge of a product designer were combined, and a humble comb became a cutting tool with, as essential point, the ergonomic benefits.

The focus is on the comb as part of an educational programme to train hairdressers, and to keep it exclusive, to a certain extent, as a kind of lifestyle. And even though the comb can be found in a few bathroom drawers, the focus is going well. As a subsidiary of L’Oréal, Redken quickly officially adopted the comb as an education tool, immediately guaranteeing its world-wide distribution. The comb is now used by 240,000 hairdressers throughout Europe and parts of America.

The Curve-O has long been able to keep going on its original design, and there are brushes and scissors available which conform to the same design principle. However, it’s now time for innovation. “As far as I’m concerned, there’s always room for improvement. There is now a wider range of products, but in practice, it turns out that the comb is till our most important product. That’s why we now make variations, based on experience in practice, and further aimed at our target group. This might be a smaller size or a more lightweight model. We consciously restrict our range, but what we do offer must be constantly optimised.” Reduce to the max: that should sum it up. That and the comparison with a Porsche 911: “The design never changes much, but the product keeps getting better.”