He is an award-winning young Limburg entrepreneur, whose brand has gradually found considerable resonance in the international cycle sport. He invests in Flanders’ Bike Valley, together with his Bioracer (bike wear) and Lazer (bike helmets). This is Jochim Aerts.

“I was taking part in bike racing at age thirteen, and by the time I was seventeen, I thought I was going to be a professional cyclist,” says Jochim Aerts candidly, “but that turned out to be unrealistic… Bioracer existed already, and my brother was a partner in it. By way of Bioracer Nederland, I arrived in the world of frame building and finishing. I never lost my passion for the bike.”

In the early 1990s, the handy bike fanatic felt he had nothing to lose, and started working on bikes, in the garage, with the help of his father. Three years later, he was officially a professional frame builder, and yet another five years later, he was the largest Belgian supplier of paint for the bike industry. “Between 1998 and 1999, a large client dropped out, and instead of going prospecting, I thought: why don’t I launch my own brand? I knew what people wanted, with all my experience in the industry.”

Jochim was passionate about innovation from the very beginning, as a means of distinguishing himself from colleagues, and beating the competition. In the less than revolutionary bike industry of that time, he introduced designs based on aluminium and carbon fibre. A few years ago, he was in at the birth of Flanders’ Bike Valley, a business cluster in which he joined forces with others to build a wind tunnel. “A small SME, like Ridley, needs leverage to get noticed. I believe in progressive innovation.”

The kick of entrepreneurship

How does a young guy, who once wanted to be a professional cyclist, have such a career? “It’s a process,” he says modestly, “It develops throughout the years, one thing leads to another… I stayed in school until I was eighteen, because I had to, but cycling was always my thing. The passion is enough to get you started, but obviously at some point running a business and selling have to interest you, and even give you a kick.”

Jochim Aerts would not have believed you, if you had told him twenty-five years ago that he would be where he is today. “I don’t know today either where I’ll be twenty-five years from now. Honestly, not a clue. I want to make good products for my clients, and I want to secure the long-term existence and livelihood of my firm, but other than that… There is one actual ambition: worldwide brand recognition! As a small SME in the bike industry, we manoeuvre quickly, while the larger companies are cumbersome; that is our strength.” 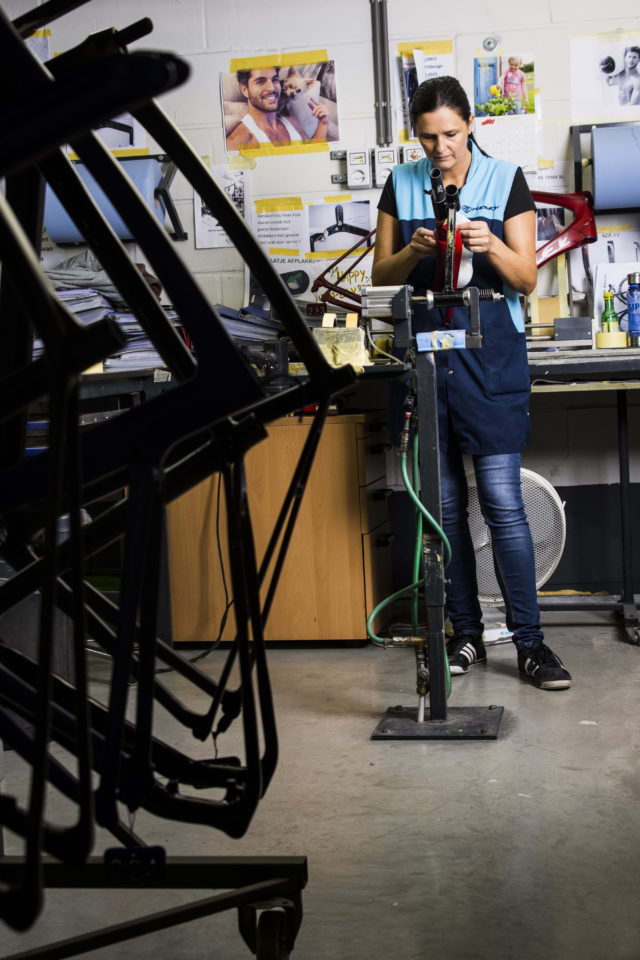 That presents opportunities for growth in a market which is changing ever faster. “As an entrepreneur, you can be a kind of book-keeper, but you won’t develop a strong brand that way. Passion for the sport and the product come first with me. I wasn’t particularly academically inclined, so maybe I have a different outlook on life. It may be true that my way is not the most economically responsible way of running a company.”

State-of the-art technology is the driver which is expanding Ridley into a unique brand globally. “Following carbon fibre, we now have aerodynamics. So much gets copied, that quick wins are not enough to ensure your survival. Therein lies the strength of open innovation, such as in Flanders’ Bike Valley: engineers from various companies can accomplish more than a single company’s team ever could. And that’s what you need, if you don’t have the resources a multinational has.”

There are any number of ways to innovate, but Jochim Aerts is convinced of the usefulness of investing in aerodynamics. “Every second and every percent of gain counts,” says Jochim Aerts, founder and CEO of Ridley Bikes, “In the long run, the mainstream consumer also profits from the ensuing product renewal. Yes, there has to be a return on investment, but brand recognition for Ridley is the result of pioneering innovation and top-of-the-line products. That is the brand perception we want to continue creating.” Ridley has that allure for the worlds of cycle cross and racing bikes. In the long term, the range may well be expanded to include turbo e-bikes, and if so, for Jochim Aerts, competitiveness and quality will be the norm there too. “State-of-the-art technology will serve us again, in getting the optimum amount of energy out of a battery. We want to be first class in the field of aerodynamics, to ensure maximum battery life on our e-bike battery.”

“The moment the mines closed, it was as though the…